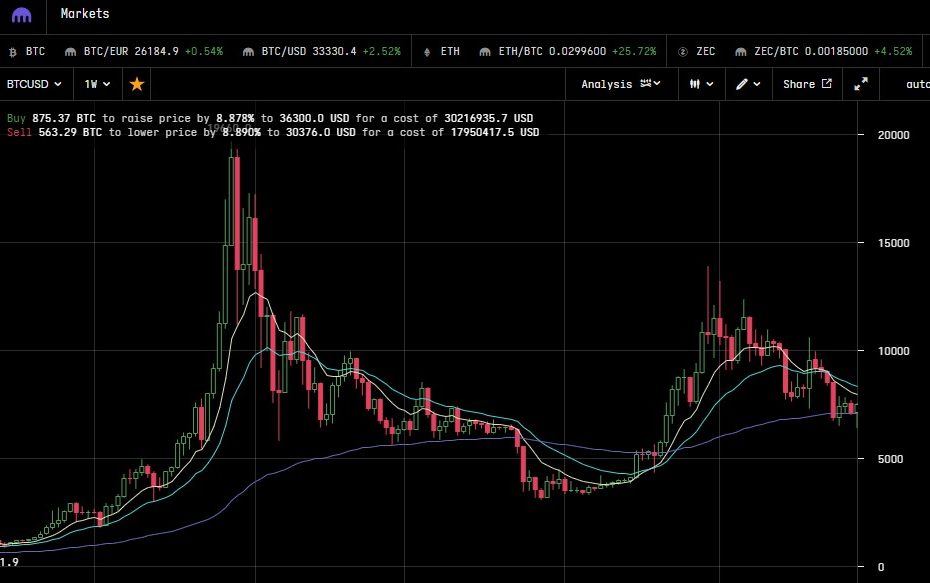 Looking at the technical analysis of the price of Bitcoin (BTC) over time and its history of making parabolic price movements I’ve come up with a very interesting and specific bitcoin price forecast for 2021-2023 based on all of its historical parabolic movements.

The history of bitcoin is filled with moves along a parabolic curve.

Here’s a Bitcoin Parabolic Chart from 2017 that helps you see the parabolic movements visually:

Looking at the new all time highs set by bitcoin in the past, they are almost always followed by a swift 30% decline in the price of bitcoin before the bearish selling momentum turns back to bullish buying again.

$24,000 is also a key resistance level above $20K that needs to be retested both technically & psychologically.

Bitcoin will need to survive the $24K level crash to form a new base bottom before the next big move of BTC price can move up 10X.

So, now that the shorts have been squeezed and the mania has peaked brining BTC to the recent parabolic move to $35,000, selling has already begun and the move down to $24,000 is under way now.

That is the best case scenario in my analysis.

However, If Bitcoin can not find a itself a new base at $24,000, then a second crash will cause the bitcoin price to then retest the $20,000 level.

There’s still a fairly realistic chance that Bitcoin gives up nearly 84 % AGAIN like IT DID in after BOTH of the last 2 major parabolic moves up.

Could yet another 84% crash happen for a three peat?

In that ultimate worst case 84% loss scenario that we’ve seen happen after both of the last two 10X+ moves, Bitcoin would bottom around $5,520 after a third 84% crash.

So what do you all think?

Is a bitcoin price crash to $24,000 going to be the next big parabolic price movement?

What do you think the price will likely be by the end of 2023?

Hopefully it will find good support at $24,000 and go back up from there, however, Time alone will tell …

Congrats to all the hodlers but don’t get greedy 😉

Disclaimer: I’m short Bitcoin – short BTC and will be looking for a swift drop to $24,000.